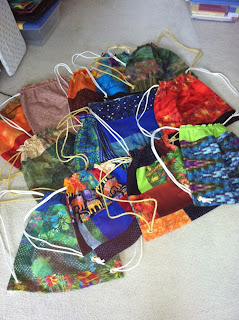 This has been a project that has taken on a life of its own!  I thought, hmmm, 10-12 bags.  Good to go.  But as I was culling my stash and finding bins of 6" strips, more bags kept happening.

This photo isn't all of them, just the ones that had been completed by yesterday afternoon.  I spent the evening with a friend, watching a movie and stringing the last of the clothesline straps, tying the knots and finally, folding and bagging each one.

Two more are headed to a friend in Virginia..  one to the widower of a dear friend, and their eldest daughter.

Mission accomplished!  Until the next time when I make more..
Posted by Wendy at 2:06 PM No comments:

I'm so not a good blogger... I just looked at the date of my last post!  And now 6 months later... here I am.
The Mala quilt top is done but its all hanging in the laundry room until it tells me how it wants to be quilted.   So far, it has been very silent, but I know it will tell me one of these days.  In the mean time, I did a baby quilt for a friend, a donation quilt for the local Planned Parenthood Gala, and just finished the top for this design by my guild sister Sarah Whitney from her line at Sweet Clover Canyon -- ok, I will get pix up one of these days.
And a blue jean quilt is in the works... just waiting for some helpers to add their straight stitching skills to the construction.
And....  my boss goes to Honduras in June for a medical mission and while we are collecting medical supplies from various offices, one the big needs is for fabric bags since most of the folks they serve don't have any containers for their personal belongings.  They have a need, I have a stash.
After purusing several patterns on line, I came up with my own.... a simple long strip of fabric that becomes a lined bag, and with poly clothesline for the cording, these will do quite nicely.   The finished size is about 17" square...
Quilting karma, for sure.
Posted by Wendy at 9:22 PM No comments: 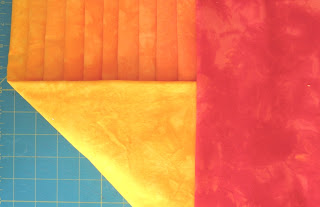 Saffron to Red!  Yep, got it.  Mala project, next version.  After the yellow got overrun by everything else with the first run, I decided to do another set.   (I need a direct pipeline to fabric from Dharma -- I'll be ordering more soon!)

This time, I decreased the concentration of the red and added 2 cc increments (yes, using a syringe) to each bag.   As you can see the first and last colors are very different, but the in-betweens are a gentle gradation.  Exactly what I wanted.

Last weekend, I had an A-HA moment.  Most weekends, I have dinner with my best friend, and we watch Netflix.   But I had become intrigued with a story I read on line about the Nangchen Nuns of Tibet.  These Buddhist women have an incredible story, now a feature-length documentary entitled Blessings.  As I watched this incredibly beautiful story, I realized that the colors I was seeking are the colors of their robes, which made the project all the more special.  And the next day, I dyed them.

Now to complete the saffron to blue run.  The first one was a bit too yellow, so back to the dye pots today.  Stay tuned!
Posted by Wendy at 9:17 AM 2 comments: 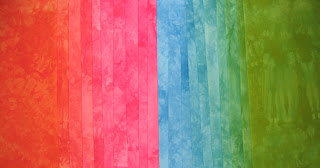 Last weekend, I started dyeing fabrics for a new project.  Being in a new office building certainly requires a new quilt (at least in my mind!)... and since our focus walls are a warm grey/blue, I want to bring some yellow in for a pop of color.

The gradation was supposed to be more yellow based but the red and blue overran the yellow in a big way!  The photo shows 20 gradations, but no yellow to be found, even though it was the base of each mix.

Back to the dye pots today.... more yellow, less red and blue.  Actually the colors are great, but not what I intended ...  oh, yeah, they will get used.... 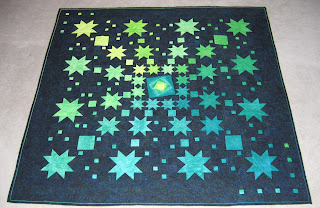 My last big dye run (20 yards) is finally almost used up.  With the help of a friend, we dyed 20 yards of blue yellow gradations for my labyrinth quilt....  this year, our guild had a mystery quilt and I used most of the leftovers to create "Green Nebula" -- 66 x 66" and I thought I would never finish it!  Its hanging at the county fair right now, then it will be for sale.
Posted by Wendy at 8:00 AM 3 comments:

Many many years ago, when I first got on the internet, I met Darryl, a nurse from Australia via a bulletin board on alternative health practices. He was doing his thesis on the same topic that I had used for mine. And a long distance, long term friendship developed thru the wonders of the internet.

In 1998, on his way to London, Darryl came thru the US and we got to meet face to face for the first time! On his visit to AZ, we played tourist and one of our stops was Sedona, nestled in the beautiful red rock country, and one of our stops there was the Chapel of the Holy Cross. There in front of a statue of St. Francis, Darryl began to hear the call to religious life, even though neither of us realized it at the time.

Throughout his time working in England and the Middle East, the call became stronger and when he returned to Oz, he began to pursue his calling. In 2002, he joined the Society of St. Francis and became Br. Nathan James. Now he is completing seminary and will be ordained as a deacon in December, 2011.

One of the magical things about our friendship has been thru quilts. At several crossroads in his journey, I've had a psychic hit about a quilt for him.... and several quilts have crossed the ocean to his hands, and often answered questions that he was holding. As he nears ordination, I truly wanted to make him a very special gift and in correspondence with a mutual friend, decided to make his ordination stole as a surprise.

Lo and behold, he soon emailed me and asked if I would make his stole! He had no idea that I was already thinking about it. Our minds were as one as we discussed the designs. One of my sorority sisters from college had been making stoles, and she graciously sent me her pattern. It all came together. 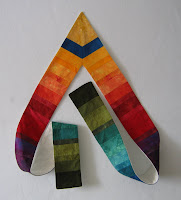 This past week, Nathan again journeyed to AZ on his way to London and again at the Chapel in Sedona, I was able to gift him with not one, but two stoles that I created to mark this part of his journey.
The first (he didn't know he was getting two!) is called Sunrise, Sunset after the song Cradle of Dawn by Libby Roderick. The song speaks to global connection and is very special for both of us. It's a rainbow of colors of the earth and more specifically those of sunrise and sunset. (click on any image to enlarge) 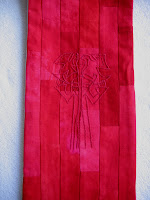 And the second, is the red stole of ordination. I dyed 13 different reds (more like 22, but only used 13), then created a brickwork pattern. On the ends, I've embroidered the outline of the chapel and most importantly, the image of the statue of St. Francis where the journey began. 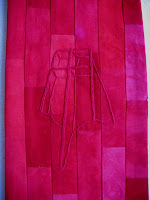 I've never made liturgical garments before, but I'm really pleased with the way they came out... and of course, Nathan is as well. Who knows, I just might have to go to Oz to see him ordained in December!
Posted by Wendy at 8:58 AM No comments:

Sometimes I think I'd rather just dye fabric than use it! My dear friend, The Singing Quilter Cathy Miller (and her wonderful husband John Bunge) have been visiting for a few days between their gigs. Cathy wanted to try freeze dyeing, and no one has to ask me twice to dye fabric.
She has carefully documented our experiments on her blog (which has lots of other fun stuff, too). But here are some of my favorites!
Cerulean Blue and Moss Green. Folded in 8ths, frozen before dye was added. 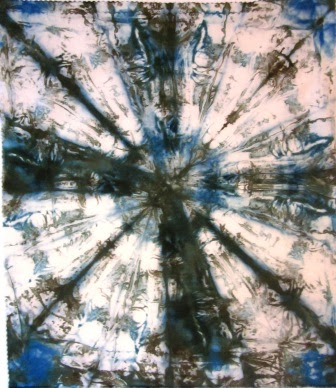 Fire Red and Cerulean Blue. Scrunched in bag and frozen. 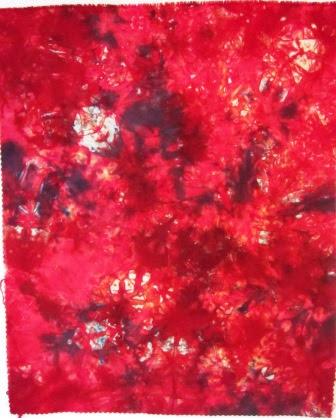 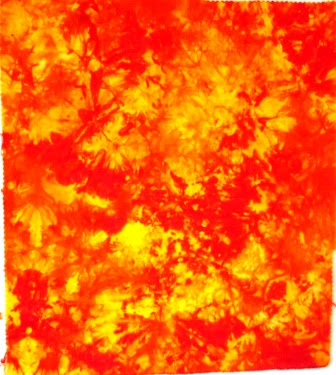 I'm so far behind in blogging..... the usual excuses apply... busy at work (we are moving to a new state of the art building in July), and life in general. I haven't done a lot of quilting, my weekends tend to fill up and those blissful at home days have been few and far between.

I did do one small piece this spring. It's called "Jonah's Mountain" and was a birthday gift to my yoga teacher. He had posted some fabulous pix on his Facebook page and one was of this mountain-scape. My brain, doing its thing, immediately said "That's a quilt!" I dyed the fabric with gradations of true navy and fire red to get the purples. The oranges were golden yellow mixed with some fire red. Pretty true to the photo, and yes he loved it.

The big news of spring is that I had an article in the May issue of The American Quilter (you have to be a member of AQS to view the issue on line)... my four labyrinths were featured and since the feedback was so good, AQ has contracted with me to produce a pattern of St. Omer's Labyrinth (shown in the background of this post).... I'll get another pix up soon. I'm working with one of my computer buddies to create the graphics and the instructions are done for the most part.... stay tuned!